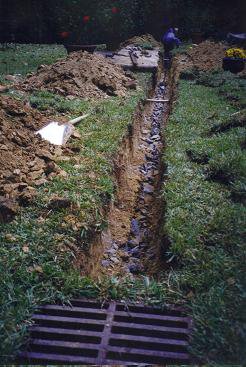 WHY IS DRAINAGE IMPORTANT?

The number one cause for foundation problems in the Jackson Area is from improper drainage around the foundation. Also, because of the make-up of the Yazoo Clay in our area, it has as much potential to allow the building to heave (or rise up) as it could settle. Therefore proper drainage is important around a building.

Most drainage problems result from improper grading. Grading is the slope of the yard. In general terms, a properly graded yard should slope gently downward from the house and toward the street and alley, so that all rain falling on the house and yard follows the slope away from the residence.

Additionally, many yards that were once properly graded develop problems, as growing trees and bush root systems create natural dams by raising the adjacent earth. Many flowerbeds are covered with mulch and pine bark each year. As these materials decompose, they naturally add a small amount of dirt to the level in the flowerbed. Over a number of years, the buildup of earth can cause water flow to change, and create a drainage problem. Additionally, well-meaning landscaping projects may also re-slope areas of the property and create low spots, or even cause water to flow toward the house. 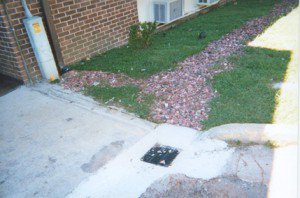 RE-GRADING THE YARD. Since most drainage problems are caused by an improperly graded yard, changing the grade of the yard or the grade of a section of the yard might solve the problem. However, because of the expense and disruption involved, re-grading the yard is usually an impractical solution.

SURFACE DRAIN SYSTEMS. Surface drain systems consist of a number of drains installed at the low points in the yard. Each drain is actually a removable grill covering a catch basin. The removable grill, which keeps out most large debris, opens to allow catch basin clean-out. Four-inch or six-inch sloped drainpipes connect each catch basin to adjacent catch basins, and finally to a discharge point.

CHANNEL DRAINS IN CONCRETE. Sometimes there is a use for a surface drain in an area where concrete exists. The solution for this is to install channel drains to catch the water in a PVC channel and discharge it in an acceptable area.

Some examples of surface drains are: 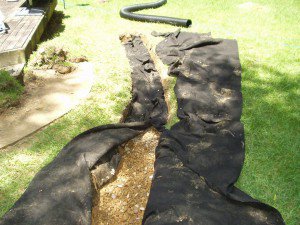 French Drains and J Drains are examples of subsurface drains. These drain systems are used when water is getting under the structure and causing increased moisture content in the soils which cause the clays to expand. This expansion of the clay is known as a heave. The remedy for a heave is to address the drainage problem that is causing the higher moisture content in the soils.

Some examples of subsurface drains are:

A proven and experienced company with knowledge of soils and foundations.

Our team will identify the probable cause and recommend the best solutions.

We serve to ensure the durability and functionality of your foundation.